Meloney Cargill grew up in Detroit, Michigan where she graduated from Cass Technical High School, and majored in Performing Arts. After graduating from Cass Tech, she discovered that she wanted to pursue a degree in education. She obtained her BA from Michigan State University and both her Masters in Reading and Language, and her Education Specialist Degrees from Oakland University.

She began her teaching career at Clintondale High School, where she taught English, Japanese, and Leadership for 15 years. She was also a class adviser, World Language Club adviser, and Student Council adviser, and served on the School Improvement Committee. Meloney was also nominated for the WDIV Teacher of the Year in 2000 and 2005. She was also the recipient of the Macomb Area Conference Student Activities Commission Award and Who’s Who.

Currently, Meloney is the principal at Clintondale High School, where they have been recognized as the first Flipped School. In addition, Meloney has served as a keynote speaker at the 10th World Conference on Computers in Education in Poland; and as a presenter at the Flip Teaching Conference, the International Society for Technology in Education Conference, and the Great Lakes Bay Summer Leadership Academy.

The thing that Meloney loves most about working in the Clintondale Community School District is the sense of family. Coming from a larger school district, where one never met the principal or the superintendent has helped her to appreciate the uniqueness of her district. She appreciates getting to know the families, the students, and the long standing members of the community.

Meloney has been married to her husband, Ronald Cargill since 1995. They have a son, Kendall, who is a 2021 Clintondale alumnus. 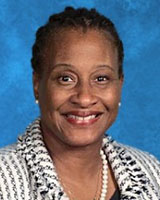 I was born and raised in Detroit, Michigan. I am the youngest of 13 boys and one girl and was loved by a mother and father that were married over 60 years. I am a graduate of Detroit Osborn High School. I attended Pratt Community College in Pratt, Kansas, on a baseball scholarship, where I received my Associates of Science degree. I then attended Madonna College where I received my Bachelors of Science degree in Social Sciences.

After graduating and working a few jobs, I read about a program that was looking for African-American men who were looking to get into the education field. The program was called the Griot Program and was to take place at Marygrove College. I was one of the 32 applicants, out of over 800 applicants, selected to the program. From this program, I received my Master of Education degree and my teacher certification. I continued on in my academic career and received my Specialist Degree, from Eastern Michigan University, with a concentration in Educational Leadership.

My first teaching assignment was with the Detroit Public Schools. Since then, I’ve worked at Inkster Public Schools, WAY Academy and New Paradigm for Education.

Before taking over as assistant principal of Clintondale High School, I was the principal at the Clintondale Middle School for the 2021-22 school year,

As an administrator in the Clintondale Community School District, I want to ensure that every student and staff member is safe and that each student has the opportunity to be successful learners as they grow and move forward in their academic endeavors.

Employed Since
2021
Powered by Finalsite